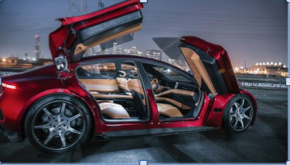 ELECTRIC VEHICLE INDUSTRY 2020 – Will EVs change the landscape of the automotive industry?

The global automotive industry landscape is changing at a very fast pace primarily and is on the brink of a technological revolution due to the introduction and innovation in the electric vehicle industry.  The countries are slowly transitioning towards the utilization of cleaner fuels. Emission rules are getting tighter both at the city and national level, which is leading the government to limit pollution and greenhouse gases and hence promote the adoption of electric vehicles.

An electric vehicle (EV) is one that operates on an electric motor, instead of an internal-combustion engine that generates power by burning a mix of fuel and gases. Therefore, such as vehicle is seen as a possible replacement for current-generation automobile, in order to address the issue of rising pollution, global warming, depleting natural resources, etc.

The growth of the electric vehicle industry is growing due to the increasing awareness of climate change and reducing the carbon footprint on the already adversely affected environment. Urbanization, congestion, energy scarcity, technology advancement, policies and pollution are harnessing new forms of mobility and key pillars of EV transformation.

Plug-in Hybrid Electric Vehicles (PHEV) : Rather than relying solely on an electric motor, hybrid electric vehicles offer a mixture of battery and petrol (or diesel) power and this is convenient for long distance journeys.

~$129.7bn in 2018 to ~$360bn by the end of 2025 at a CAGR of 15.69%. Electric vehicles are one of the fastest growing mode of transport which have adopted smart technologies. It constitutes of electric buses, cars, trucks, and electric bikes. The market is maturing at a fast rate due to increasing demand, initiatives to expand electric vehicle charging stations, and diverse vehicle models

Recharge Points: Electric fuelling stations are still in the development stages and it might be difficult to recharge frequently.

Short Driving Range and Speed: Electric cars are limited by range and speed

Longer Recharge Time: an electric car take about 4-6 hours to get fully charged therefore, we  need dedicated power stations as the time taken to recharge them is quite long.

Battery Replacement: Depending on the type and usage of battery, batteries of almost all electric cars are required to be changed every 3-10 years.

Electricity is expensive : Sometimes electric cars require a huge charge in order to function properly this may raise the bill.

China holds great potential for the electric vehicles market to surge. It is the producer of the highest number of electric vehicles. As per the Forbes, Chinese automakers manufacture approximately more than 200,000 electric commercial vehicles per year.

One leading estimate of total job creation from PEVs – direct, indirect, and induced – is that provided by the BlueGreen Alliance/American Council for an Energy-Efficient Economy. The organization predicts that the new federal vehicle standards passed in 2012 will result in the creation of 570,000 jobs, including 50,000 in vehicle manufacturing

Five electric cars to watch out for in 2020

There are currently over 4.1 million electric cars on the roads globally, or 0.6% of the passenger car stock worldwide. But the International Energy Agency aims to increase the share to 30% by 2030.

The competition will be tougher for foreign automaker in China as it will introduce stringent norms for automakers to promote electric vehicles by introducing a credit system. Automakers will require credits to produce conventional vehicles. More than 43 models are expected to be launched in 2019 in which 25 will be BEVs and remaining being PHEV’s. The models will be a mix of small city cars, SUV’s and performance vehicles.

For details on each of the factors, region-wise study and trend analysis please feel free to refer to the following Electric vehicle reports from CrispIdea:

ELECTRIC VEHICLE INDUSTRY – 2020 Will EVs change the landscape of the automotive industry?

Compendium of Cloud Industry Per...

Compendium of Cloud Industry Per...